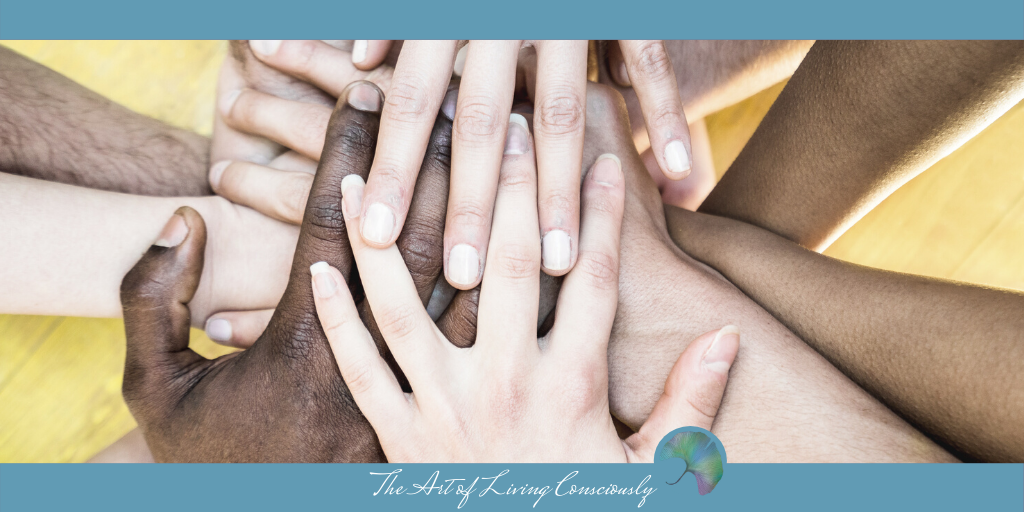 In light of recent events (and events that have been going on for years and years), I want to present consciousness as part of the solution to healing racism in the United States and in the world.

Now, this is a massive topic beyond the scope of this post (I will recommend a resource later for exploring this subject in greater depth) but the heart of it is this: If we want to create change, we must first be conscious of our own thoughts and how systemic racism has shaped us.

Becoming conscious is the first step to healing racism

Consciousness of racism as a system

I read an article about a teacher who did an experiment with her class, and the results were fascinating.

Within seconds, the brown-eyed kids looked depressed and the blue-eyed kids acted superior and started bullying. Because authority told them someone was superior, the class divided into the oppressors and the oppressed.

After lunch, the teacher told the students she had made a mistake, and it was actually the brown-eyed kids that were better and the blue-eyed kids that were inferior. She had the kids switch places, and the pattern of discrimination happened all over again.

It was powerful to see these kids who had been friends that morning suddenly turn on each other when they believed that one group was better than the other.

Now think about the impact of that a thousand times over in our culture. Think of all the ways white people are told they’re better, treated better, and given privilege, all while black people and other people of color are given the opposite.

If you are white, you might be wondering what I’m talking about, because most of us would say that white people aren’t better than black people. Most of us believe this on the surface, but we are unaware of the unconscious racist beliefs instilled in us from growing up in a racist society.

Most positions of power are occupied by white men. Many movies, TV shows, and commercials depict white people as superior and black people as less capable or even dangerous. Many shows and movies don’t depict black people at all. Most products are designed with white people in mind. In the United States, our schools teach very Euro-centric, white history and little to nothing about the history of other cultures outside the limited context of slavery in America.

People of color are discriminated against in healthcare, academia, and the workplace. Most people of color do not have access to the same resources white people enjoy due to poverty, geography, or open discrimination.

Until we accept that we live in a racist society, we cannot begin to create change.

Consciousness of racism in ourselves

We are all racist, prejudiced, and stereotype. All of us have stories about “the other”, whether that’s men about women, women about men, white people about black people, black people about white people, etc. This is part of being human. Stereotyping is a shorthand for us to get around in the world. This has positives and negatives.

We think dualistically. We tend to see things as either/or, good/bad, us/them. In reality, we are all one. But it is hard for our brains to truly, deeply comprehend that. If we did understand this, we would know that we cannot harm another without also harming ourselves.

We live in a racist society.

So what does consciousness have to do with healing racism? Unless we are aware of our prejudices, we continue to unconsciously act them out. After all, if you don’t know how and where you are being racist, you can’t do anything about it.

This doesn’t mean we’re “bad” people. It means that we’re human. We are all impacted by our environment, upbringing, and experiences.

Many of us believe that segregation ended decades ago because black and white people can use the same drinking fountains and attend the same schools, but there’s still a lot of segregation by systemic design.

We still see “white” neighborhoods and “black” neighborhoods. The birth of suburbia was specifically to get inner-city white people away from black people. You may have heard the term “redlining,” which was designed to keep the races separate.

Very few people I know mingle with races other than their own. We’re still not making a lot of progress in personal integration.

Since white people are the dominant group in this country, it’s our responsibility to educate ourselves and understand how racism has shaped our beliefs, and then actively work on transforming our thoughts, beliefs, and behaviors.

For people on all sides of this issue, as trite as it may sound, love is the answer. I say this because when we act out of love, there is no room for fear or separation. There is no “other”. Again, this is impossible for us to comprehend through dualistic thinking. Consciousness work informs us of the path forward.

If you’d like to learn more about this subject, I highly recommend White Fragility by Robin DiAngelo. Books are a wonderful way to start learning how society has shaped your beliefs!

← Consciously Working With Feelings in Times of UpheavalAre Consciousness Circles the next step in your transformational journey? →