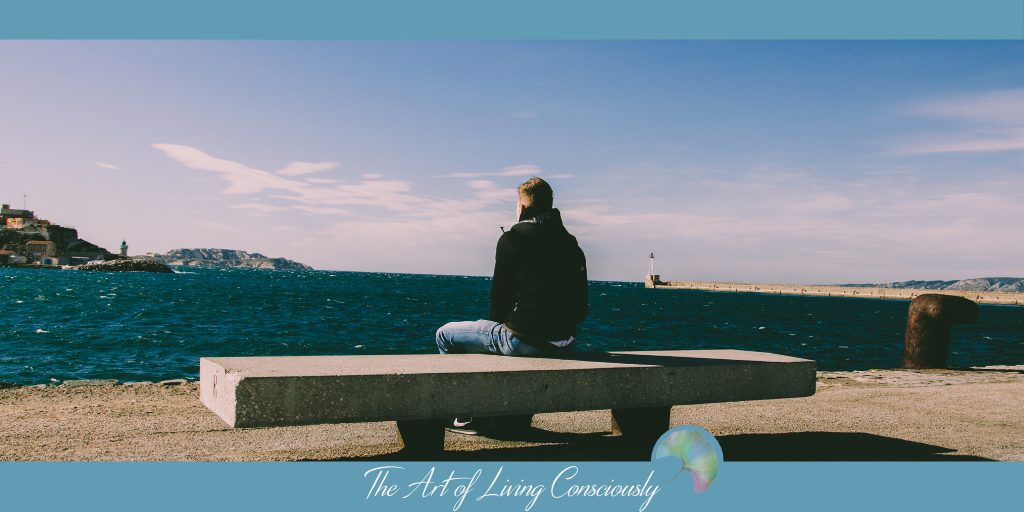 One common misconception I frequently hear about conscious living is that it is passive, selfish, or that it makes us complacent.

Often, when we hear about consciousness or conscious living, we think of a bearded, half-starved monk sitting in lotus pose on a mountain top, far away from the rest of the world and completely detached from day-to-day life. Some people falsely believe that consciousness is about navel-gazing self-centeredness and that if we become more mindful, we will lose interest in what is going on around us because we’re too focused on ourselves.

The truth is, consciousness is the opposite of being passive or selfish.

The Truth About Conscious Living

Consciousness is about truly accepting all.

I think this is where the mix-up happens because many of us think that accepting is the same as promoting, endorsing, or passively allowing without attempting to make a change.

Acceptance doesn’t mean liking something or not wishing to do something about it. You can accept something without promoting it.

You can accept that you have diabetes and still make healthy lifestyle changes.

You can accept that your child is struggling in school and still help them with their homework, hire a tutor, or enroll them in a special school.

You can accept that war exists without promoting war.

Accepting simply means that you don’t fight against reality or say that it shouldn’t exist. It does exist, and you accept that.

Let’s take the war, for instance.

If you refuse to accept war and continue thinking “war shouldn’t exist” while trying to ignore it, you won’t take action. Or if you think “there shouldn’t be war,” you may feel angry and fight against war and attempt to fight fire with fire, which only creates MORE war. We become warring in our actions when we refuse to accept and instead, remain unconscious.

Unconsciousness will not lead to what you want. If you want peace but engage in warring thoughts and actions, you will not be effective in creating peace.

You’ll just feel you’re in the war too.

“I will never attend an anti-war rally; if you have a peace rally, invite me.”
― Mother Teresa

Consciousness is choosing not to engage in anger, hostility, or unkindness in order to engage for the cause you want.

When you accept that war exists and stop fighting against reality, you will feel much more peaceful.

If you want peace to be around you, you have to create peace within you.

Consciousness can be a way to be powerful. Look at leaders like Gandhi, Mother Teresa, and Nelson Mandela. They were all leaders in peaceful protest and worked to create something they wanted instead of working against something they didn’t want.

When you feel peaceful, you can approach others in a peaceful manner. Now, this doesn’t mean you don’t protest or get arrested or take action. It does mean you’re not going to torch someone’s house, throw rocks at people, or resort to violence when you’re actually working toward peace.

At the end of the day, working against something is less effective than working for something.

When you work against something, you just enlist more unconsciousness.

You can’t light a room with an unlit candle. You can’t light the dark through dark actions. You won’t create light if you get angry and upset. You’ll feel dark inside and spread darkness to others.

For example, if you fly off the handle about someone littering and yell at them for it, you’re spreading darkness. Your anger probably won’t motivate them to stop littering. What you’ll probably do is start a fight or scare them and then you’ll both end up feeling terrible.

The only thing that can make light is light.

If you approach this situation with consciousness, you may simply say “Excuse me, you dropped something” if it appears they littered by accident. You could say to yourself, “I’ve littered too, accidentally. What can we do to prevent littering?” You can think about possible actions to take to solve issues that may cause littering like lack of education, too much fast food, or disposable plastics. You could identify the problem to be solved instead of getting mad and starting a war within you or with another person.

On a smaller scale, we often think that consciousness means constantly turning inward while ignoring everything around us.

If you think about it, though, unconsciousness actually makes us focus on ourselves. When we are unconscious, we get stuck in patterns like perfectionism, self-consciousness (which, ironically, isn’t very conscious), and feelings of lack. We also feel separate from others, which doesn’t feel very good on its own, but can also lead to physical or emotional violence because we believe we can hurt others without hurting ourselves.

In reality, we can’t. And the more time we spend in consciousness, the more aware we are of this. Conversely, we also can’t help others without helping ourselves.

Consciousness can also draw people to us because when we’re conscious, we emanate light. Some people light up the room (in general), and they’re probably more conscious.

When we behave unconsciously, we extinguish our light. No one likes to be in the dark, and we’re drawn to people who emanate light.

Ultimately, consciousness helps us, and we cannot help ourselves without helping others as well. Therefore, living consciously is one of the more peaceful and unselfish things you can do.

← How to Have a Healthy Romantic RelationshipThe Basics: What is Consciousness? →